Imaqulotta's Irreverent Book Blog A blog for people who take books seriously, but little else.

To Dragons, You Are Crunchy, and Might Be Tasty With Ketchup

Dragons. Humans have a love-hate relationship with these fantasy creatures. My first tutor on the subject of dragons was C. S. Lewis, whose depiction of dragonish attributes in Voyage of the Dawn Treader assumed children of his time would know that dragons were greedy and hoarded gold. I had not known this previously, so my education obviously had been lacking. My later reading of The Hobbit confirmed this general idea. However, my ideas were being tainted by the glorious telepathic dragons of Anne McCaffery in her Dragonriders of Pern Series. The amazing dragons of Ms. McCaffery were a far cry from the greedy, evil creatures that bold knights would slay. Sir Terry modified my ideas about dragons still further, for on the Discworld, dragons are endangered creatures, as tame as pets. The point is that I am open-minded on the subject of dragons.

Tara West is a member of the Eclective, and I thoroughly enjoyed her stories in their Haunted Collection and Apocalypse Collection. So I was thrilled to be given the opportunity to review one of her novel length works, Curse of the Ice Dragon.

According to the author’s blurb, this is what we are expecting from Curse of the Ice Dragon : “Born with mark of the Mighty Hunter, Markus has the skill and strength to feed his people, but not to confront his own tyrannical father. Shamed by his cowardice, Markus releases his frustration on the forest creatures.

The village prophet warns that Markus’s reckless ways will bring down The Hunter’s Curse, and for every animal Markus kills, his loved ones will suffer the same fate. When the warnings go unheeded, the Sky Goddess unleashes her ice dragon. Now Markus must flee the dragon without killing it or his beloved brother will die.

Markus’s flight takes him to the lands of the mysterious Ice People. There, the beautiful maiden Ura helps Markus learn the compassion and courage he needs to face the wrath of the Goddess, but the final confrontation will not be without price, as Markus must choose between the life of his brother and the fate of the girl he loves.”

Curse of the Ice Dragon is a relatively unambiguous title, so my open-mindedness notwithstanding, I had a preconceived idea about the ice dragon in this book. However, without spoiling anything, I can tell you that the dragon is not what she appears, which is a reflection of this entire work. Expect the unexpected!

Markus is a sympathetic, although not thoroughly likeable, character in the beginning of the novel, but his growth throughout made me proud of him by the end. The Sky Goddess is treated as a positive force in the beginning but is she really? Each character we meet is not what he or she might appear, and proves this by the end of the book.

The pacing, description and characterizations here are first rate. Ms. West creates a plausible world, and an engaging story. As the beginning of a series, the piece wraps up its own story but builds interest for the next book. I’m grateful to have been given the chance to share this work with you. On the Imaqulotta Scale, I would rate Curse of the Ice Dragon as Heavenly.

What I Read On My Christmas Vacation

Since we last met, I’ve been reading for my own pleasure. This is not to say the books I am requested to review, or chose to review are not a pleasure. Most often they are. I think it’s the pressure of a deadline. Obviously, I don’t often allow myself to be pressured, as you’ll note by my sporadic entries.  Still, I want to share with you as often as I can. So my little vacation was enjoyable and carefree. Since I haven’t yet begun the next book I intend to share with you, I’m going to borrow from my childhood to give you:

What I Read On My Christmas Vacation

1. Death of a Kingdom(The Norothian Cycle), by M. Edward McNally- As I have shared with you my feelings about the first book in this series, The Sable City, I will merely say that this volume continues the tradition of excellence. Again, the characters are what make this book. If you enjoyed The Sable City, you’ll enjoy this one even more!

2. The Eclective: The Apocalypse Collection- I’ve introduced you all to the Eclective, and these stories are up to the standards of the previous collection I discussed with you. Even thought the world did not end, you’ll enjoy these visions of what might have been, or might yet be.

3. Driving Me Nuts, by PJ Jones- I envy the ability of authors to share the trauma of mental illness with humor and heart. Anytime I contemplate writing about my illness, I imagine some terrible melodrama. Jones is a virtuoso of comedy, but this novel is very different from the author’s other works. Although comedy is definitely a major component here, the work is very true to life and the realities of working through issues and coming out the other side. This was a moving read.

4. “A Face in the Crowd”, by Stephen King and Stewart O’Nan- One of the nicest things about the e-book revolution is the capacity to buy a single story. Although many people predicted the short story’s death a very short time ago, the form seems to be reviving with the ability to send these babies out all on their own. Amusingly, the man who is often criticized for his wordiness has never stopped turning out these self-contained bursts of story like a well-tipped bartender pouring tequila shots. “A Face in the Crowd” reads like a classic Twilight Zone episode, and is just plain spooky fun.

5. “In the Tall Grass”, by Stephen King- This is a longer story that does not go where anyone could be expecting. Again, the King of “overwriting” is perfectly capable of creating credible characters with brevity. THIS STORY IS DISTURBING. Think of the King stories that have unsettled you the most, then prepare for him to kick it up a notch.

6. Dodger, by Terry Pratchett- A Dickensian historical fantasy only seems to be a departure for Sir Terry. His work in Discworld has been filled with much of this flavor, and those of us who read his work on a regular basis will benefit from knowledge we’ve gained there. Dodger is a unique, intriguing novel, which combines actual historical figures with literary creations of the time, and Pratchett’s own amazing characters to take readers to a London they’ve heard about, but never really got to know. Mystery, comedy, romance, and a bit with a dog. What more could I ask?

In the New Year, I hope to give you more regular reviews, and some extra fun that I haven’t quite dreamed up yet! I look forward to taking Imaqulotta’s Irreverent Book Blog to the next level. 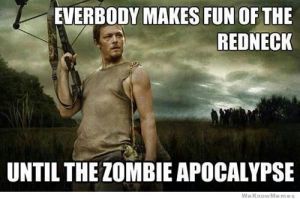 You see, what had happened was… My dad MADE me watch! I tried not to get hooked! The first one’s free! Oh, that’s a whole different thing. I do have a new blog in the works, hopefully to be finished within the next few days. I’m sure Daryl would apologize for stealing my brain, if he weren’t so busy keeping the entire world in suspense for another month. Oh, and being a bad-ass. He can multitask.